My account
Wishlist (0)
5% Discount for online purchases
Shopping cart (0) Sub-Total: 00 $
You have no items in your shopping cart.
Menu
Personal menu
My account
Filters
Search
Close
Menu
Previous Post Alternatives for Natural Gemstones: Lab-grown, Simulant and Assembled gems Next Post What kind of jewellery do customers like the most?

All You Need to Know About Birthstones: History, Birth Months and Properties

You must have heard about the special gemstone of your birth month. These gemstones are called Birthstones and each month has its gemstone that is known to have healing properties for people born in the same month. Birthstone jewellery is very popular in many western and eastern countries, as the best way you can take advantage of these gemstones is to wear them and carry them with you. Besides, each birthstone has a peculiar meaning and is a symbol of a specific concept.

But was this costume of wearing birthstones the same from the first? What is its origin? What is each month’s birthstone? Do weekdays and zodiac signs have specific gemstones as well? Stay with us and find out about all these and more in this article gathered and written by Hassanzadeh Jewellery Gallery.

The twelve gemstones we know today as birthstones are apparently related to an Israelites legend that is also mentioned in the book of Exodus in the Bible. Back then, the high priest of Israelites used to have a breastplate he wore all the time. There were 12 gemstones placed next to each other on that breastplate and it is said that on each of them, the name of one of the 12 sons of Israel was engraved like a seal to symbolize the twelve tribes of Israel in those times.

As there were no specific sources for recognizing different gemstones, colour was the factor that people used to distinguish gemstones with, so it is probable that the gemstones we know today as the 12 birthstones are not the ones they thought to be. For example, the Ruby that we know now as the birthstone of July might have been Garnet on the breastplate.

The 12 gems on the breastplate were Diamond, Sapphire, Topaz, Onyx, Emerald, Beryl, Sardius, Amethyst, Carbuncle, Ligure, Jasper, and Agate. Astrologers also believed these gems to bring protection and good luck for their wearer and that is the reason for their sanctity.

Later in the 5th century, some associated these gems with the 12 zodiac signs, and that was the beginning point to the contemporary belief about birthstones. Actually, the use of these gems was also different from today and people used to own all the 12 gems and wear the specific gem of each month on the same month. This was a common belief, but the game changed in the 18th century when wearing gems based on birth month replaced it and the National Association of Jewellers confirmed this practice officially.

Now let’s take a look at the list of 12 official gemstones for 12 Gregorian months and their properties and benefits for people born in each month.

The word Garnet comes from “gernet” or “granatum” which means a deep red colour, or the seed of pomegranate which is also red-coloured. This charming gemstone with its bloody colour is known to bring protection for travellers, light up their nights and take away the fear. Because of its unique and beautiful colour, Garnet can be set on any kind of metal and make the most wonderful jewellery piece your eyes have ever seen. 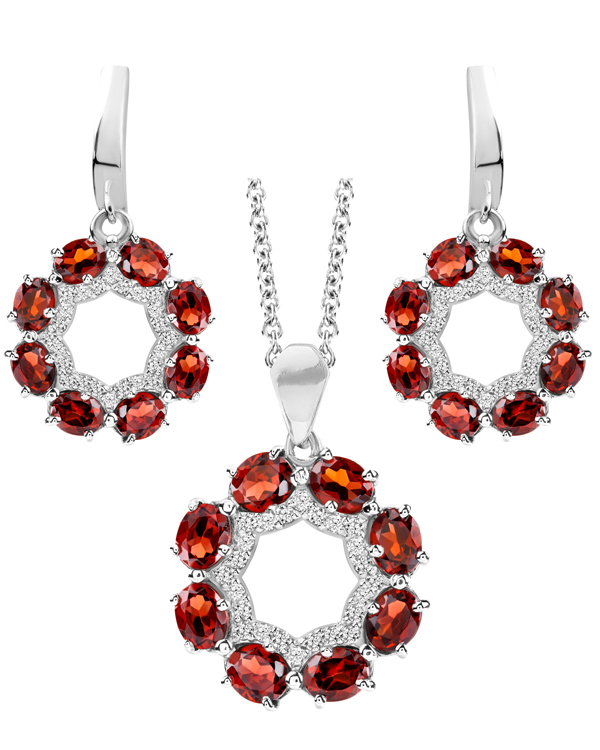 The word Amethyst comes from the Greek term “amethystos” which means “sober”. The name was chosen so because it was believed back then that carrying an Amethyst with you will keep you from getting drunk and will help you stay sober.

Amethyst brings courage and bravery for its wearer, enhances the sense of power, and is also known as the gemstone of wisdom. Because of its deep purple colour, Amethyst is a gemstone of royalty and has always been used in making royal jewellery and crowns. 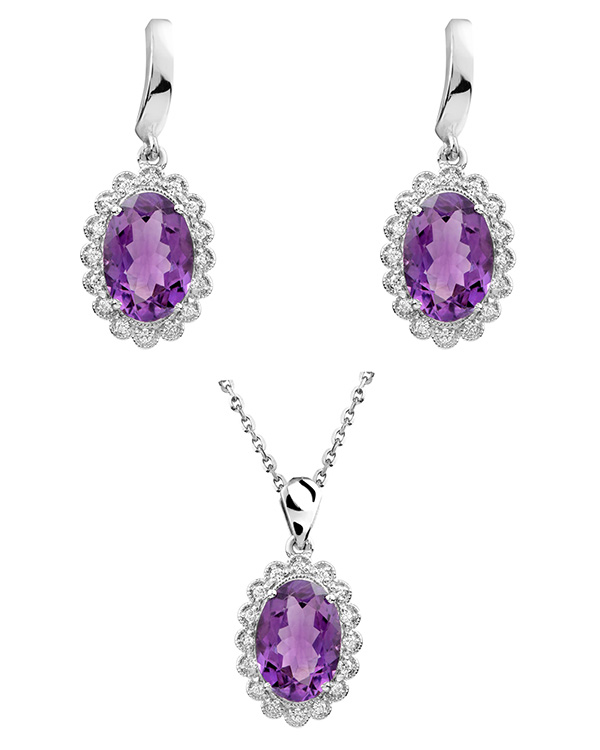 Because of its special light blue colour, the name of this gemstone is combined with the terms “Aqua” which means water, and “Marina” which means sea. Aquamarine’s properties are also related to the sea as they believed carrying an Aquamarine by a sailor would bring good luck in sea travels and will protect them from sea dangers.

The gemstone has healing properties and is believed to be curing the liver and heart. Also, it strengthens marriage relationships and brings harmony between spouses. 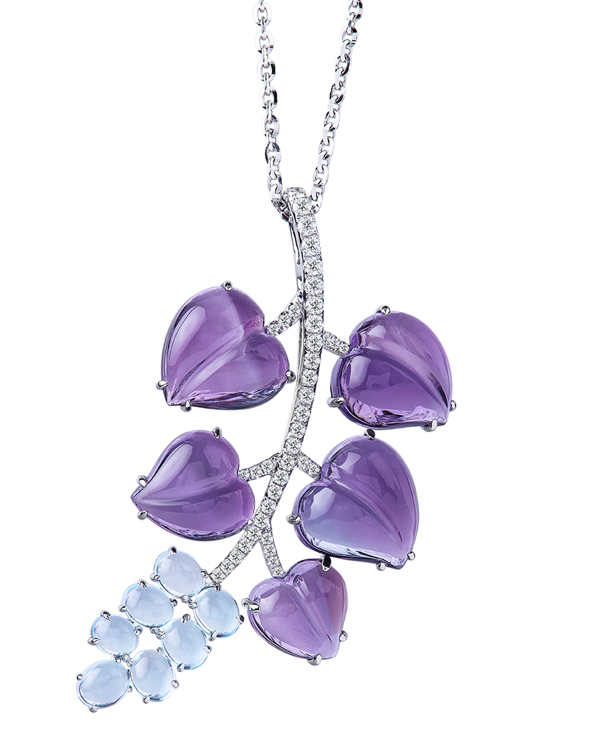 Diamond is the most famous gemstone in the world and even it is amongst the rarest minerals, it is wildly used in different industries because of its hardness property. Diamond symbolizes the kind of love that never dies and is a suitable gemstone also for lovers as most of the engagement rings today include at least one diamond.

Diamond brings courage to people born in April and ensures their hearts. It is also believed that Diamonds bring loyalty, purity, victory, and hope to your life and enhance love between lovers. 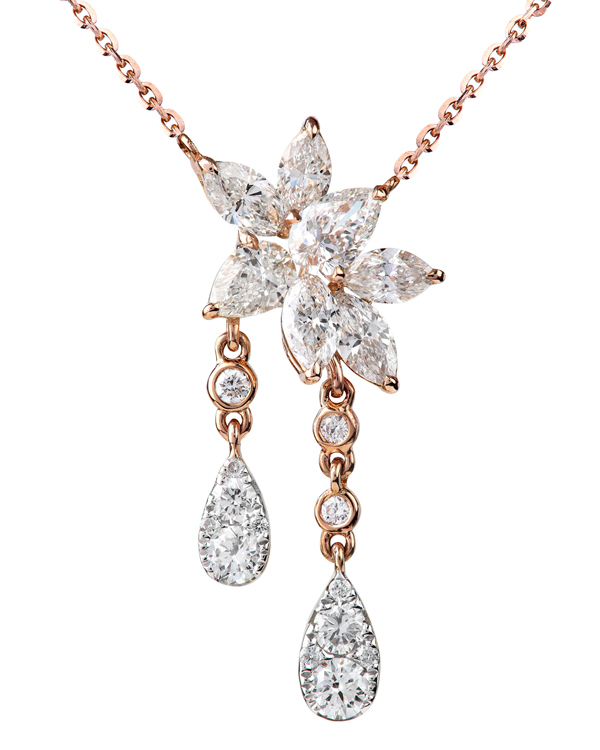 Emerald with its unique deep-green colour is one of the most magical gemstones you can ever find. This gemstone has been in the spotlight for such a long time as it is said that Emerald was Cleopatra’s favourite gemstone, in a way that she owned all Egypt’s Emerald mines throughout her reign.

Emerald is the gemstone that ancient Romans used to carry with them to offer it to the goddess of beauty and love, Venus, as it is the gemstone of love, renewal, and rebirth. Emerald is also associated with the concepts of growth, patience, and wisdom. 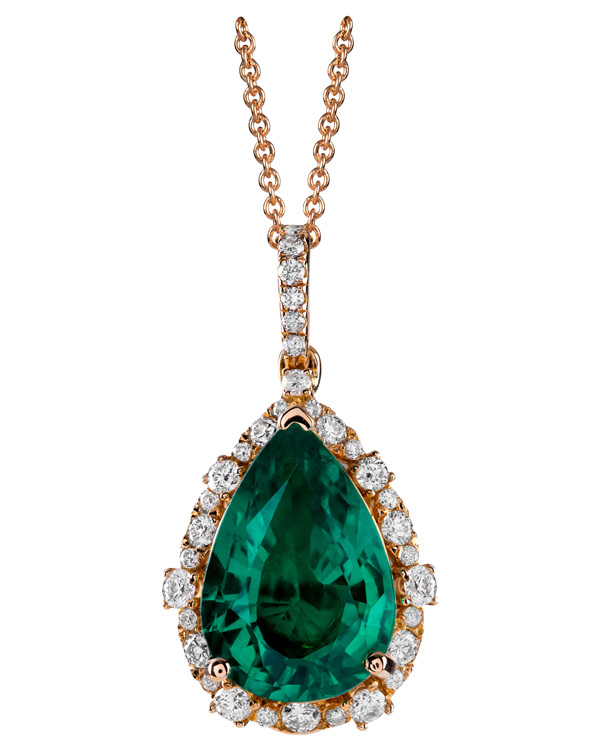 There is a beautiful myth from ancient Greeks that says when Aphrodite, the goddess of love cried out of joy, her tears hardened and turned into Pearls and that’s why Pearls were always symbols of purity.

It is a common belief that Pearl brings luck and takes away bad vibes, sadness, and anxiety from its wearer. It also enhances patience, a sense of dedication, and memory and softens one’s heart when worn. 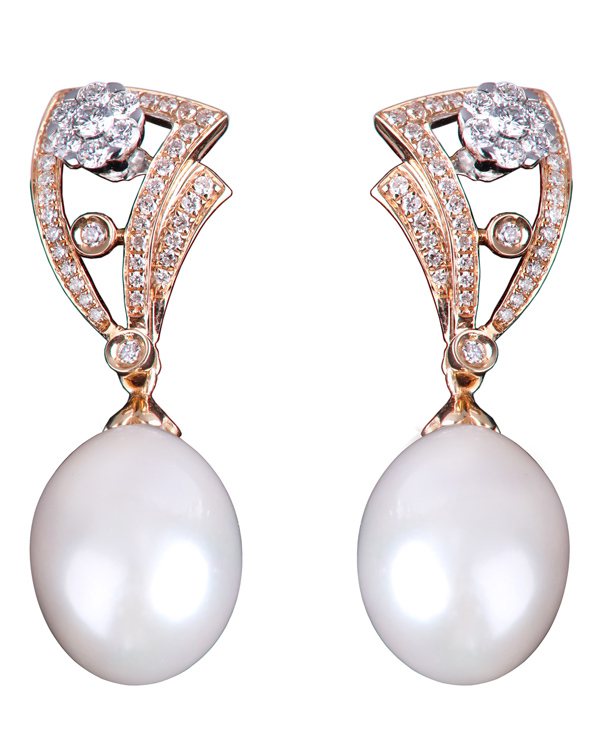 Ruby with its bloody red colour is the gemstone of love and is the most popular gem for lovers to gift to each other on valentine’s day. Ruby has been in the spotlight for a long time and ancient societies have always adored it as a symbol of power and wealth, in a way that they called it the king of gems.

Ruby brings passion to your love life and encourages you to love recklessly. It also protects your mental stability and lets you pass the problems easily. 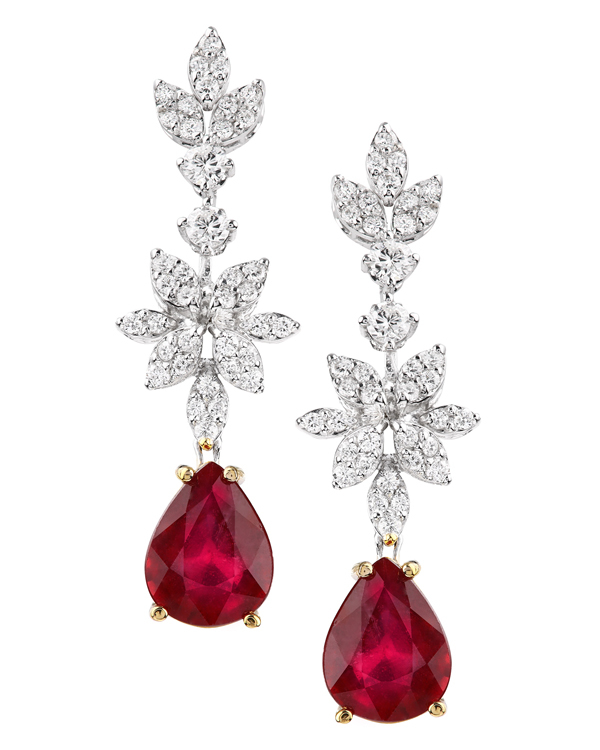 There are many interesting myths about this light-green gemstone. There was a common belief that having your medicine drunk in a cup made of Peridot multiplies the effect of the medicine. Also, as this gemstone turns transparent under the sunlight, ancient Egyptians used to think that it absorbs the rays of the sun and respected it as the “Gemstone of Sun”.

It is said that when set in gold, Peridot would take nightmares and bad dreams away from its wearer. Peridot symbolizes success, luck, peace, and strength. 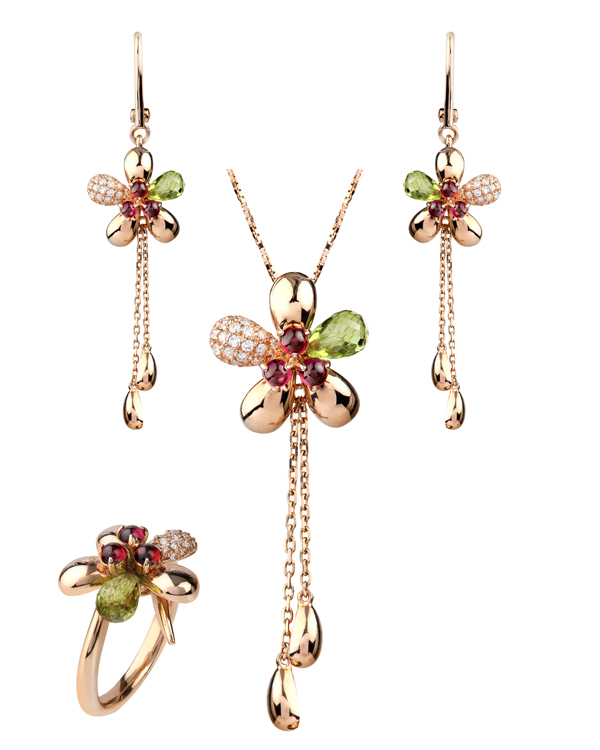 Sapphire is named after the Latin idiom, Sapphirus, meaning Bluestone. Sapphire has long been a gemstone considered by kings and senior officials. The alchemists considered this charming blue gem to be dependent on the element of air and the planet Saturn.

About the healing properties of Sapphire, there was a belief that said placing a venomous snake in a container made of Sapphire causes its death. Sapphire enhances intelligence, keeps poverty away, solves the problem of insomnia, and is a symbol of wisdom and purity. 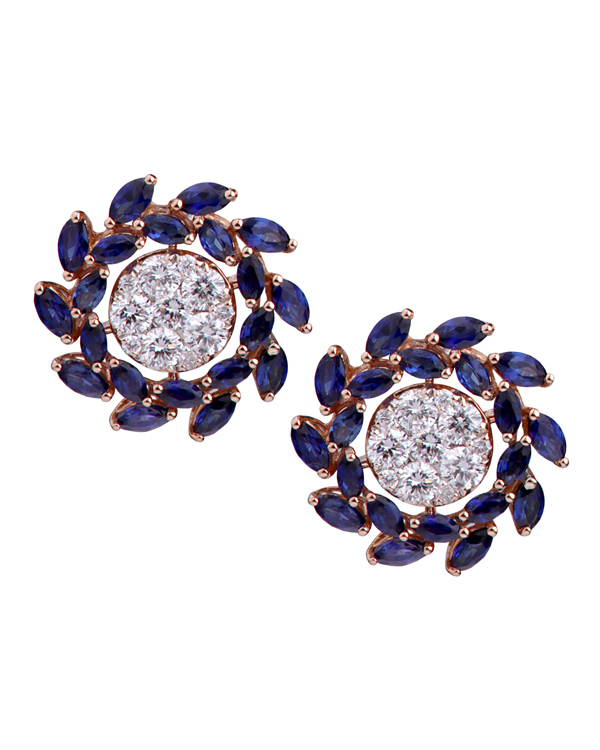 The name of this marvellous gemstone comes from the Latin idiom “Opalus” which means Precious Jewellery Piece. Opal protects its wearer from evil, enhances emotional feelings, confidence and faithfulness. It is also effective for letting go of anger, fear, and shame. 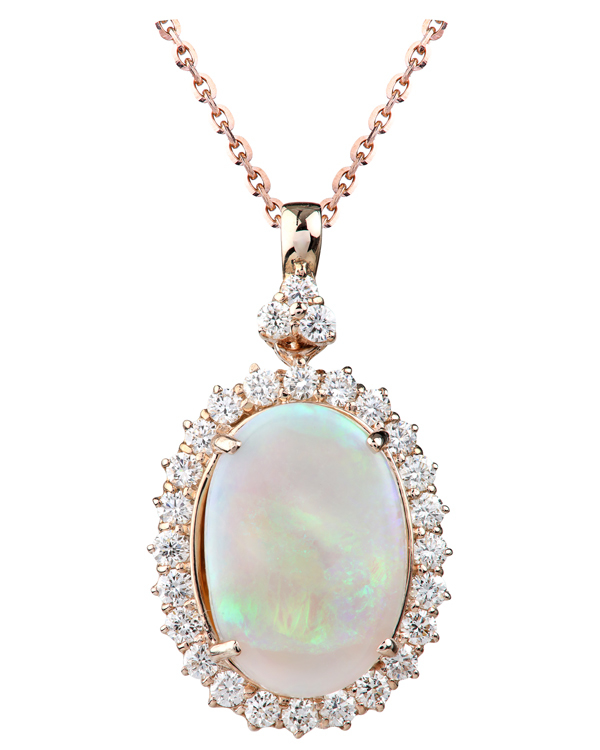 Although Topaz is more known to be the birthstone of November, Citrine is the other famous November birthstone as well. Citrine is one of the rarest and most unique minerals and has a beautiful dark shade of yellow. This gemstone transfers the power in sun rays, improves your mentality and emotional feelings, and increases your sense of appreciation for others.

The word Topaz comes from the Sanskrit idiom for Fire. There is an Egyptian myth that says the God of Sun has coloured Topaz with his golden sunlight. This magical gemstone enhances intelligence, creativity, strength, and love and makes you wealthy. 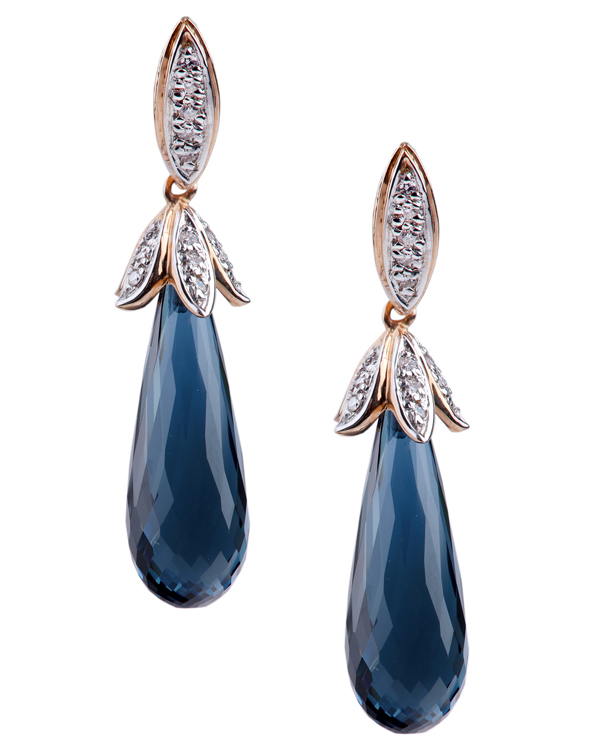 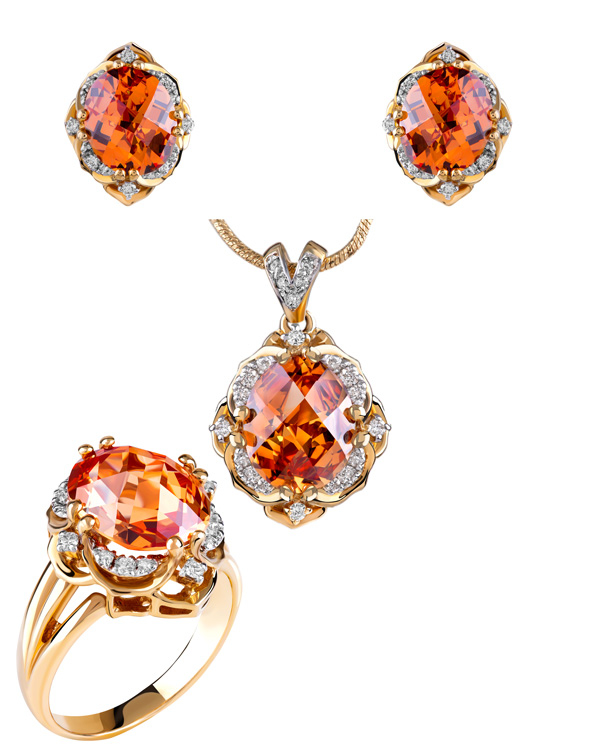 Turquoise is the only opaque gemstone in the twelve gems of Aaron’s breastplate and belongs to November-borns. This magical gemstone had a lot of popularity in all ancient societies and has maintained its popularity even now in modern times.

It is said that in the Ancient Persian Empire there was a myth that wearing Turquoise as a bracelet or necklace would protect its wearer from an unnatural death, avoids evil eye, and looking at the gemstone would increase eye vision.

If the wearer of this gemstone gets sick, the gemstone looks pale and if they die, the gem loses its colour. Yet, if a healthy, young other person owns the same gem, it finds its glow and colour back again; and this is only of the reasons why we call Turquoise the magical gemstone. 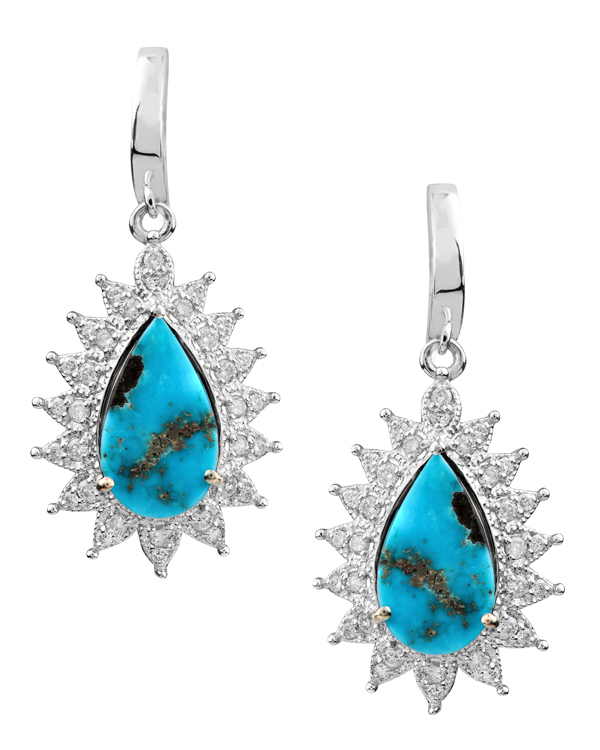 You can buy all these wonderful gems, placed in different jewellery pieces like bracelets, pendants, rings, or earrings in a variety of beautiful designs, suitable for anyone with any taste. Find your birthstone, choose your favourite design on the Hassanzadeh Jewellery Gallery website and purchase it as a lucky charm. Birthstones also make the best gift for your beloved ones and would bring joy and passion to their lives!